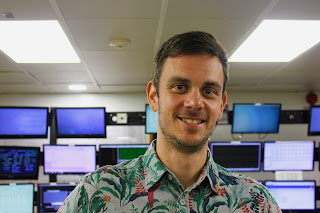 WHAT IS YOUR AREA OF RESEARCH:
I am a research associate working at the Institute for Geophysics, at the University of Texas at Austin with expertise and research interests spanning the fields of marine geophysics, Earth sciences, signal processing, data inversion and high-performance computing. My research try to address geoscientific problems with the acquisition of new seismic surveys and/or reprocessing of existing surveys, such as: the internal workings of volcanoes, earthquake hazards from megathrust faults which lie offshore, or the stability of continental margins where methane ice can break down with increasing ocean temperatures.

WHAT IS A FIRST TIME FOR YOU ON THIS EXPEDITION:
To date, I have already been part of four sea-going expeditions. My first expedition (BBMOMAR2) was onboard the Ifremer R/V Le Suroît and the main focus was to deploy/recover Ocean Bottom Seismometers (OBSs) from the summit of the Lucky Strike volcano on the Mid Atlantic ridge. The two following expeditions were onboard the R/V Marcus Langseth. In January/February 2017, I was a shipboard scientist on the CEVICHE expedition in central Chile, where we collected over 4,500 km of long-offset seismic lines across the rupture zones of two of the largest instrumentally-recorded megathrust earthquakes: the 1960, Mw 9.5 Valdivia event and the 2010, Mw 8.8, Maule event. Then, in November/December 2017, I took part of the SHIRE expedition in New Zealand, this time as a co-chief scientist, with the intent to study the variability of fault slip behaviors along the Hikurangi subduction fault. As for the AXIAL3D survey it is my first expedition as a chief scientist and my first three-dimensional seismic experiment. I am accompanied by Alistair and Steffen, two senior scientists with a lot of field experience, the experimented technical and marine crew from the M. Langseth and a very talented squad of students from all over the world.

WHAT ARE YOU MOST EXCITED TO LEARN/DISCOVER:
Alistair, Graham and myself have been studying Axial Seamount for quite some time now and we are excited to see how the more complete data coverage offered by 3-D seismic data can improve our understanding of magmatic, tectonic and hydrothermal processes occurring within this large seafloor volcano. The presence of the OOI seafloor observatory on top of Axial Seamount has also attracted a wide range of scientists interested in Volcanology and I am looking forward to discuss our latest findings with them and to benefit from their inputs.

WHY DO YOU LOVE YOUR FIELD:
Marine geophysics is a wonderful field at the frontier of physics, mathematics, Earth and computer sciences. It involves a field or sea-going component, where one can travel to some of the most remote places of our planet, and also offers numerous technological challenges; from data acquisition 100s of miles offshore to the optimization of algorithms on some of the most powerful supercomputers.


TELL US SOMETHING ABOUT YOURSELF:
As many of my colleagues onboard, I like to keep myself fit and active. I enjoy rowing, cycling, running, skiing, climbing and will enjoy a pit-stop at local coffee shops, restaurants and pubs from time to time.

Email ThisBlogThis!Share to TwitterShare to FacebookShare to Pinterest
Labels: Meet the team