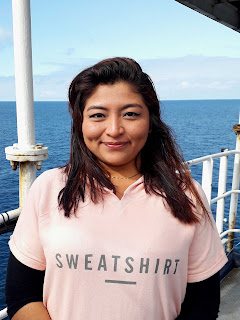 One of the critical teams on a seismic expedition are the Protected Species Observers who monitor the marine mammals and wildlife around the ship to mitigate their disturbance from acoustic activity. So let's meet PSO Alejandra Ramos from Mérida, México!

HOW DID YOU GET INTO THIS JOB?
A dear friend of mine told me that her company was recruiting people, and she suggested that I could do a good job as a PSO. I sent an application and they called me for an interview. Apparently everything went well because here I am, in the middle of the sea!

WHAT IS A USUAL DAY LIKE AT SEA?
Visual watch has to be conducted 30 minutes before the sunrise until 30 minutes after the sunset. You have to collect data such as weather conditions, visibility, wildlife sightings, and seismic operations every hour, and of course you have to keep an eye on the sea, looking for marine mammals or any other protected species (birds and turtles).

DO YOU HAVE A FAVORITE PLACE THAT YOU HAVE VISITED AT SEA?
I am really new in this business (6 months), I only have been in the North Gulf of Mexico and now here in the North Pacific, which I think is my favorite place so far.

IS THERE A PARTICULAR SPECIES YOU LOVE TO MONITOR?
So far, blue whales are my favorite.

DO YOU HAVE AN INTERESTING WILDLIFE FACT TO SHARE?
The blue whale is not only the biggest animal on Earth nowadays, it is the largest animal ever known to have lived on Earth! They can live up to 100 years!

WHY IS THIS JOB IMPORTANT TO YOU?
I believe it is important because, that way, universities and oil companies can perform seismic surveys at the sea without harming species that are sensitive to those operations. Above all, we should keep the planet safe.