So you signed up for a research cruise and here you are: day number one and we are underway. I guess by now you’ve realized the learning curve extends a bit past the science and equipment....

Nothing out here is quite like what you left back home, including the lingo used aboard the ship. Don’t worry, I’ve been on a few research cruises now, and I served aboard a few U.S. Navy vessels when I was in the military, so I have this stuff down. I’ll get you started with the basics. There’s more to learn than what’s covered here, but this will at least get you to the right place at the right time. 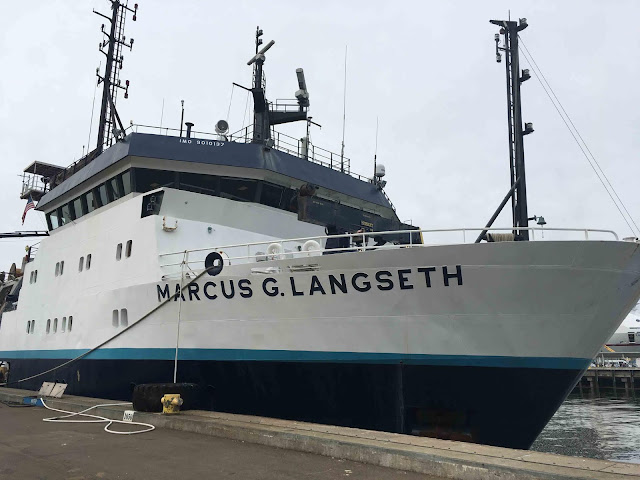 The first bits of bazaar lingo you notice is the standard directions are no longer in play. Words such as left, right, front, and back were left ashore alongside your soy latte and memory foam mattress. Left and right are now port and starboard, respectively. These are important words because port or starboard side designates the location of much of the equipment you’ll be using. Now that you can find your way laterally about the ship let’s work on the front and back. If you’re told to meet at the bow, you’re being directed toward the front of the ship (that’s the pointy end if you’re still a little confused). Likewise, the back of the ship is called the stern. This is where the propellers are located, but we don’t call those propellers, we call them screws. If you don’t need to be as specific use forward (self explanatory), and aft. These terms usually describe rooms or areas within the ship. For example: “We’re keeping the bags of coffee in the forward wet lab. Grab some on your way back from the mess deck, we’re running low.” Note: ships run on diesel, oceanographers run on coffee. We’ve also run across a new term, in this case a critically important place, so I’ll keep moving.

Now that you know how to get around, you may be interested in where to go. Back to the mess deck, this is simply the dining room. Similar to a small dining hall in your campus dormitory, this place harbors one distinct difference: the food is actually better! That’s right, better. Science at sea is inherently more difficult than ashore. Experiments go sideways and gear breaks down all the time, but a good meal can set all right with the world. I might as well mention the galley while we’re here. This is the kitchen where the cook and stewards prepare four meals a day plus plenty of snacks. The men and women that work here are as mission-critical as anyone or anything aboard. They can make a bad day go away faster than a couple pints of beer! Moving on, there’s the bridge. Star Trek fans should be familiar with this place. Like the movies and TV shows, this the nerve center of the ship, you’ll find the Captain and mates up here. From this perch atop the ship they steer, navigate, communicate, and keep a look-out. The bridge is all business 24/7, so don’t come in without an invitation. I’d be remiss if I didn’t mention the head, a.k.a. restroom. There are a few of these aboard ship but we all have to share, so be polite and keep ‘em clean.

Things you encounter along the way

Continuing on the topic of getting around, new names for common fixtures and conduits are probably worth a mention. We touched on this earlier so let’s break down the deck a little further. Anything floor related is called the deck. Like a building with multiple floors, ships have multiple decks. The naming convention may vary slightly from ship to ship, but some examples aboard the R/V Langseth are A deck, B deck, main deck. Sometimes they’re referred to according to the equipment installed on the deck, such as the streamer deck, paravane deck, or gun deck (no, not those kind of guns, we’re unarmed). “Deck” can be used in a very localized sense, the same as you would use “floor,” for instance, “Let’s get these boxes picked up off the deck.” Making your way around the ship you will make extensive use of passageways. A passageway is just a hallway but here they’re pretty narrow, so we have a bit of edict we utilize when passing one another in opposing directions. Sound complicated? Don’t worry, you’ll have it sorted in no time. As you move down the passageway you’ll certainly encounter a ladder well. This is just a staircase, but again a little narrower and a little steeper that what you’re accustom. Be sure and grab a handrail until you get your sea legs, getting tossed down a ladder well is no fun. Be patient, your sea legs will turn up in a couple days.

Motion of the ocean

Speaking of sea legs, let’s talk about how the ship moves around out on the open ocean. This is also a good chance to try out some of our new vocabulary. The up, down and side to side motion is described by three terms. First is pitch, that’s a rocking motion from bow to stern. Next is roll, that one rocks the boat side to side, or port/starboard. Roll bounces you around the passageway like a pinball, but it can also make for great sleep. The combination of pitch and roll is heave. This is just the general up and down movement, which we keep careful note of to calibrate some of our instrumentation. The ship has sensors installed to help us monitor all the motion accurately, but if you look around you will probably find some work spaces adorned with ”locally manufactured monitoring devices.”

What the hell time is it anyway?

Guess what, telling time, that life skill you thought you had mastered, that’s a bit different as well. An ocean-going vessel is a 24 hour a day operation, so it’s much easier to remove the ambiguity of AM and PM. Frankly, I think the 24 hour clock should be used ashore as well, 24 hours in a day, 24 hours on a clock. This isn’t difficult to work out, but it does take a little while to develop an intuition. If dinner is served from 1700 to 1800, what does that mean? Don’t be afraid to count on your fingers, your time intuition usually turns up about the same time as your sea legs. Of course, you may be assigned to the night shift, which will take a little more getting used to both in terms of time and the night creatures themselves, like me. Night crew might be a little weird, but we’re a lot more fun! However, that’s another story.


It’s totally normal to feel a little confused, a little weary, and maybe a little sick when you first step on board, but that all goes away after a few days. The work you do and the people you meet while you’re here will stick with you for a lifetime. Enjoy your time out here, not many scientists get the opportunity to go to sea and if you have any questions about the nomenclature, don’t be afraid to ask....