Collecting seismic on land at sea... is one better??

Did you know that you can collect the same kind of data on land too?

Matt Griffiths writing and this is day 23 aboard the Langseth. I now have 23 days of experience doing marine seismic. For some background, I just finished a Masters doing seismic processing of near-surface reflection data on land. It has been interesting being apart of the Axial cruise and seeing the similarities and differences between marine & land seismic. 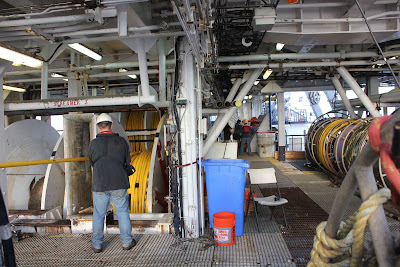 Firstly, in both cases the reflections are pretty hyperbolic. But holy lord there are a lot of diffractions in this marine data; the seafloor of Axial is rough! On land I have been spoiled with bedded clays with beautifully continuous reflections. 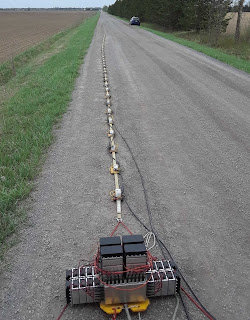 The other difference is the scale of the operation. Marine seismic is enormous compared to near-surface seismic. When we were spooling out ~24km of streamers, with 360 degree view of the ocean deep you can't help but contemplate the vastness of the world. And it's just a tiny blue dot in the universe. Being at sea I finally understand why it's a blue dot. Near-surface seismic would have you think that the world is a green or brown dot.

A similarity is the exciting monotony of data acquisition. With every shot gathered we are one step closer to finding some treasure; be it a magma chamber or some actual treasure. It doesn't matter if it is marine or terrestrial, the suspense just builds and builds until you first see the freshly processed section. 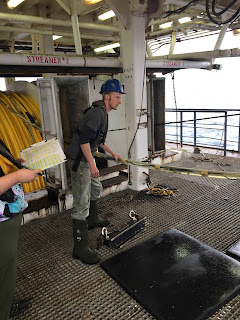 Both settings for seismic have their dangers. Acquiring near-surface data using the land-streamer & Microvibe (See Figure 1. -- Details in Pugin, 2013), you have to keep watching out for cars and poison ivy. At sea you have to be watching out for tripping hazards to avoid falling down the stairs or falling overboard.

Although the environments are very different, the physics and fun are the same. If you like doing seismic on land, I highly recommend you try seismic at sea. The inverse is true as well.

Peace be with you,
Matt