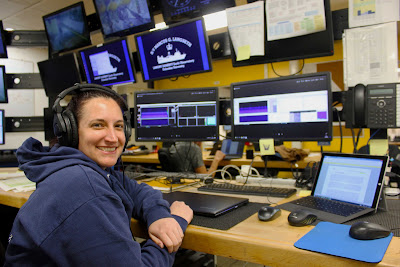 Meet Amanda, another one of our Protected Species Observers!

HOW DID YOU BECOME A PROTECTED SPECIES OBSERVER?
I learned about this kind of work from one of my teachers at college a few weeks before I graduated. He knew of a company that was hiring at that time from a previous student and passed it onto his current students about to graduate. The work sounded interesting, so I contacted the company for more information and began working offshore about two months after I finished college. I have been working offshore for 12 years now and I still love it.

WHAT IS A USUAL DAY LIKE AT SEA?
This can vary a lot depending on the vessel, the location of the survey, and the regulations that we are working under for the project. In general though, we conduct a mixture of visual and acoustic monitoring for protected species and other wildlife 24 hours a day. Visual monitoring involves scanning the surface of the water and area around the vessel for any animals present, and acoustic monitoring involves listening for marine mammal vocalizations using a hydrophone cable towed behind the vessel. The team members rotate through a schedule where we have a few hours of monitoring followed by a break, where we can rest and catch up on the paperwork. Once the paperwork is completed, our downtime is our own to rest and relax, or to socialize with any crew members also not on duty at that time. Some vessels have quite a few options for things to do during downtime, including gyms, tv/movie rooms, libraries, ping pong tables. and foosball tables. Some vessels also stock board games and puzzles for every to use, and some vessels also have gaming systems and musical instruments (usually a guitar).

DO YOU HAVE A FAVORITE PLACE YOU HAVE VISITED WHILE AT SEA?
The most beautiful location I have ever been for a survey offshore was Santorini. We did a survey in and around the volcano, and the view when we were inside the caldera was amazing. However, the most exciting location has to be New Zealand. We did three surveys around the islands, and the variety of the wildlife there was like nothing else I have seen anywhere else. I saw quite a few new marine mammal, fish, and bird species there that I had never seen anywhere else before. I saw my first blue whale on those surveys, and we also saw several species of penguins offshore!

IS THERE A PARTICULAR SPECIES THAT YOU LOVE TO OBSERVE/MONITOR?
I don’t really favor one group or species over the other. It’s always exciting to see any species offshore, especially the ones where there is little to no chance to see them from onshore. Every PSO has a list of species that we hope to see one day, and if we are lucky enough, we will get the chance to go to a location where we might be able to see them. I’ve been lucky enough to see a lot of species on my list in the last 12 years, but there are still a lot of other species that I would love to see one day. At the top of my list right now are a right whale, a narwhal, a whale shark, and a great white shark.

HAVE YOU GOT ANY INTERESTING FACTS TO SHARE ABOUT MARINE WILDLIFE?
There are a few species of marine mammals that have the word whale in their name that are not actually whales. For example, killer whales, pilot whales, melon-headed whales, etc. are actually all dolphins. The killer whale is the largest of the dolphin species, followed closely in size by the pilot whale.

The main visible difference between seals and sea lions is that sea lions have visible external ears and seals do not. There are also fur seals, which are different from true seals as they have external ears like sea lions.

The sperm whale is the largest of the toothed whales, and is the only living member of the genus Physeter. Their name is derived from the spermaceti organ which fills most of their very large heads, and aids in both echolocation and in their incredibly deep dives that they do in search of food. Spermaceti (i.e. sperm oil) was a prime target of the whaling industry, and was used in oil lamps, lubricants, and candles. Sperm whales also sometimes produce ambergris, which is a waxy waste product of their digestive system, and it is highly valued as a fixative in perfumes among other uses.

WHY IS THIS JOB IMPORTANT TO YOU / THE COMMUNITY?
One of the biggest concerns in regards to marine species with seismic research is the amount of noise added to the water from the sound sources used to collect the data. These noises can potentially harass or harm these species, adversely affecting not only those individuals being exposed, but also the overall populations of those species. This is of particular concern for protected species, whose overall populations are considered to be threatened or endangered. Our job is to monitor the area around the sound source for protected species, and to mitigate for them to reduce how much they are potentially impacted by our activities within the environment in which they live.