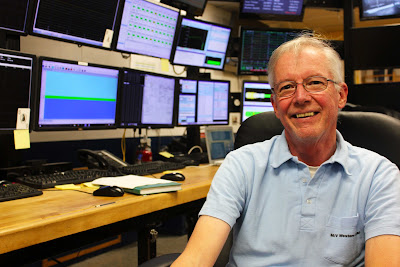 WHERE HAS THIS JOB TAKEN YOU?
I had traveled the world extensively in my 30-some years of being in offshore seismic exploration, and many of them were (and still are) not places you really want to visit. During my time with Lamont I have toured the Pacific ring of fire, Pago Pago, Tonga, Fiji, Taiwan, the Aleutians, Pacific Northwest, Mexico, Costa Rica, Peru, Chile, and New Zealand. On the Atlantic side there is the Atlantic seaboard, Bermuda, the Azores, Spain, Iceland, the Mediterranean, the mid-Atlantic ridge, the Cape Verde Islands, and the South Atlantic. If you are willing to embrace different cultures, nearly every place will become a favorite. I still find new favorites and look forward to return visits to old favorites.

WHAT ARE THE PERKS OF THE JOB?
I think most people would think the travel to seemingly exotic destinations would be the biggest perk, but to me it is not. The shared experience with the new people you meet on every cruise, along with the underlying excitement about discovering, understanding, seeing, and participating in something new is the biggest perk.

ARE THERE ANY CHALLENGES WITH THIS JOB?
On the technical support side, this is a very challenging line of work. It requires constant attention to detail, oft-times working with limited or no spare parts. A fixed time frame in which to accomplish the primary goals despite every negative influence or breakdown encountered is probably the most difficult. One has to plan outside the box routinely and be able to readily implement (at times) an untried alternative.

HOW DID YOU GET INTO THIS JOB?
I have worked in the seismic exploration field since the 1980s. In 2006 I was working as a Project Manager for NCS Subsea on a project offshore Gabon, West Africa. I was asked by my boss (the VP of NCS) if I would be interested in doing some “gratis” consulting work for Columbia University. I said “yes”, and was put in touch with Dr. John Diebold, the chief scientist at the Lamont Doherty Earth Observatory. I worked with him via email on the design particulars of a 3D seismic survey. Through John Diebold I learned that Columbia had purchased a former Western Geophysical seismic ship and was doing a conversion to adapt it to have some ability for general purpose oceanographic research. I had worked for Western Geophysical for many years and was actively involved in the six ship building program in Ulsteinvick, Norway where the Western Legend (now Marcus G. Langseth) was built. I had also spent a lot of time on the Western Pride, which is the sister ship to the Langseth. While in Houston once for business, I was invited to see the Langseth (still under conversion) in Galveston. I traveled to Galveston, visited the Langseth, and ended up staying a couple of weeks to help get it rigged up for sea trials that were scheduled in January 2008. I ended up working assisting with the sea trials, and then was asked to help out on a cruise a month or so later. Pretty soon I was asked to be on every cruise. Through scientists and people from the NSF that I had met, I was encouraged to apply for a position at Columbia. I did and was accepted immediately. I had the best wishes for success from my previous employer, which is always a good thing to have.


HOW DO YOU SPEND TIME OFF OF THE SHIP?
When I am off the Langseth, I do try to spend as much time at home with family as I can. Being absent for an extended period of time tends to make home tasks pile up. I also spend a fair amount of time at the Lamont Doherty Earth Observatory taking care of other related Langseth duties.