The CHIRPs are chirpin', the multibeams' are beaming, and the airguns are firin'...

The main dataset we are collecting during this expedition is multichannel seismic (MCS) reflection data. This data is collected using the streamers and airguns deployed and towed behind the vessel. When collecting the data, the vessel moves along designated survey lines. While towing the instruments behind, the airguns are continually fired in incremented shots and the hydrophones within the streamers are receiving the sound waves from the fired source. 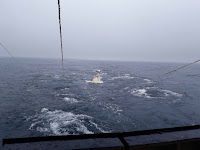 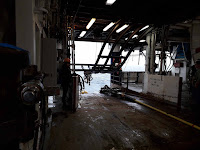 The raw data coming into the main lab are in the format of “shot gathers”. These shot gathers give us information about the various reflective layers beneath the seafloor from a single source and receiver pair. Once collected, these shot gathers will be further processed to create a cohesive MCS profile of the survey line that depicts the various reflective features beneath the seafloor. We will use these reflective features as markers to identify magma reservoirs and melt lenses inside the volcano!


In addition to MCS data, the vessel also holds other instruments that simultaneously collect data.

One of the additional instruments is the Acoustic Doppler Current Profiler (ADCP). An ADCP is an instrument that utilizes the Doppler shift of sound waves to track water parcel velocity. In other words, the ADCP is collecting data on the speed of the currents in the water. Using the ADCP, we can collect data on how fast and in what directions the ocean is flowing in the various regions of our survey area. This data can give us additional information about the ocean conditions that can impact how the streamers and airguns are oriented behind the vessel. With really fast currents, the alignment of the streamers can be affected. With the ADCP, we will collect the data on the currents which will be helpful when understanding the geometry of the streamers when processing and interpreting the MCS data.

Another data collection method is the deployment of the XBT. An XBT probe is deployed off the stern of the ship and measures a temperature and sound velocity profile (sea surface all the way to ~1900m deep) at a single space and point in time through the water column. This is used to calibrate our sea temperature and bathymetry data. From various sensors and receivers on the hull of the ship, we also continuously collect: sea surface temperature, seawater salinity (i.e. salt concentration), and gravity.

On board, we also have two different instruments that are used to collect data on seafloor bathymetry (depth and topography): the CHIRP Echosounder and the multibeam sonar.

All of the data collected from these various instruments, whether it is the shot gathers of the MCS data or the seafloor bathymetry from the multibeam, are live-streaming on one or more of the computer screens in the main lab. These screens are always monitored by technicians and scientists to ensure the instruments are working and the data is being recorded!