Before we set out to sea, our science party spent the day on Mount Rainier.

Departing from Seattle certainly had its perks! As well as some time exploring the city (what amazing markets!), our science party took the opportunity of a free day on-land to explore Seattle's local volcanic monster: Mount Rainier! Mount Rainier is one the largest Cascadian volcanoes and last erupted in the late 19th century. 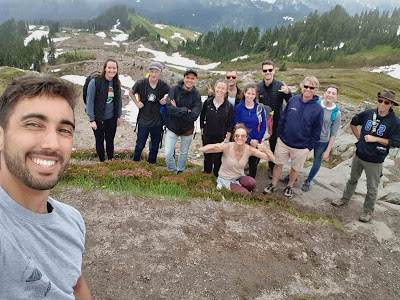 Mount Rainier National Park really is a jewel of the Pacific Northwest, being one of the first areas to be designated a National Park. Even though Rainier has a primary volcanic peak, the rest of the park is a rugged landscape of hills, cliffs, waterfalls, glacial lakes and extensive forests. 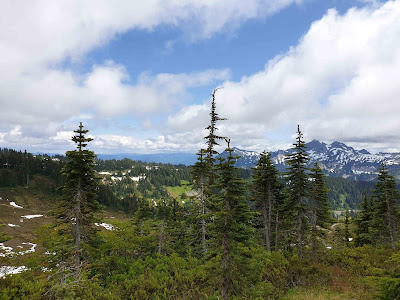 We found out that when the first roads were constructed through the park, they were specially designed and routed to wow any visitors and nature enthusiasts, where individual twists and turns now open out onto dramatic views and landscapes. Talk about good organization! 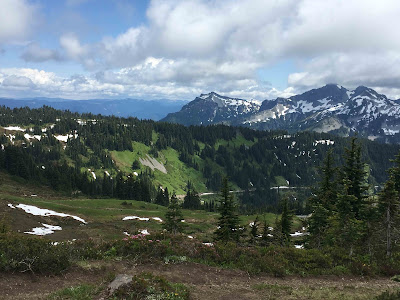 Despite large eruptions in the past that have produced extensive deposits and lava domes, it is the overlying glacial cap that currently holds the greatest threat to the populated areas surrounding the Pugent Sound: Seattle, Tacoma and Olympia. In the past, the volcano has produced lahars that have spread meltwater, mud, ash, wildlife and debris many 10's of miles from the volcano. A future eruption, or even a signficant increase of heat flux to the summit, could cause extensive melting of ice cap sending floods down the flanks of the volcano. With ice capping the volcano throughout the year, this remains Rainier's greatest volcanic hazard.

Unfortunately for our excursion, the clouds had the upper hand preventing our view of the ice-caped summit. However, we were able to see the peak looming in the background once we arrived back at the hotel over 50 miles away! 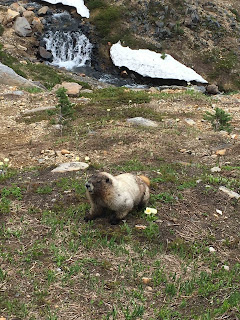 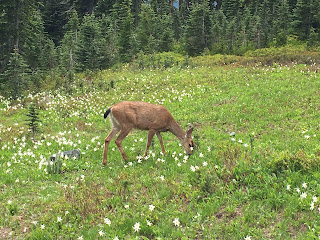 Nevertheless, the views of the surrounding hills, forests and valleys were stunning, and we all had a great time getting to know each other and even some of the local wildlife. My personal highlight of the day was definitely getting a close up snap of a very curious and charismatic chipmunk.

But for now, that's our last bit of on-land nature for the next 5 weeks. See you soon terra firma!!