Well, we are finally on our way to Axial Volcano. After a couple of days in the port of Seattle waiting for the ship to be ready for us to board, we finally settled into life aboard the R/V Marcus Langseth.

Following one night's sleep on the ship in port, we woke up bright and early to wave goodbye to Seattle and to begin our exit of the Pugent Sound and out into the big blue. We placed individual bets on the exact time that we would leave the continent and cross into the ocean. It turns out that we were all a bit optimistic on our bets of a 7-10 hour exit, with it taking just over 12 hours.

After a first night's sleep at-sea, we woke to the smell of bacon and the sound of a practice fire drill. We practiced meeting at our on-deck muster station, donning our lifejackets, and locating the immersion suits. We all looked very fetching; fashion on the high-seas is hard to beat.

It then took us a full 24 hours to cross the Cascadia Margin (essentially the entire Juan de Fuca tectonic plate) and arrive at Axial Volcano where we have begun to deploy the streamers in preparation for collecting data (more on this in an upcoming post!). This full day at sea gave everyone the chance to become more familiar with the layout of the ship, get into their shift schedule, but to also enjoy the fresh air being out at sea! 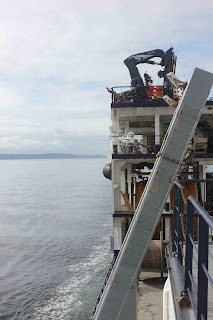 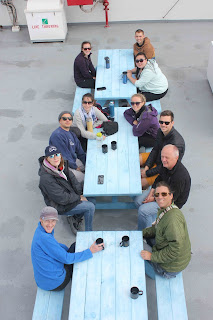 Axial Seamount sits on the Cobb-Eickelberg Seamount Chain on the Juan de Fuca Ridge and is the current location of the Cobb Hotspot intersecting the mid-ocean ridge between the Pacific and Juan de Fuca tectonic plates.

During this time transiting across the NE Pacific, our Protected Species Observers (PSOs) were very busy! Their job is to monitor and document the local wildlife and marine species observed throughout the expedition. Check out the Protected Species page to learn more; we will continue to upload their spottings (COMING SOON!)!