It's time to deploy the 24 kilometers worth of streamers behind the vessel!

By Shelby Brandt and Massimo Bellucci

On this cruise, we are collecting predominantly 3D seismic reflection data. This is achieved by deploying airguns that create sound waves that travel down to the seafloor, penetrate the ground, and then reflect off density variations within the subsurface. These wave reflections then return to the water surface where they are recorded by receivers. 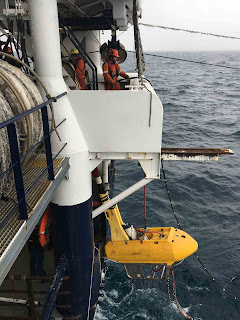 A streamer is essentially a long cord that trails behind the ship carrying such receivers, and so-called “birds”. For this cruise, we deployed four streamers that are each 6 km long and spaced 150 m apart. The use of four streamers, instead of one, allows the data to be collected in three dimensions from the shot, rather than two dimensions that would be achieved with only one streamer. 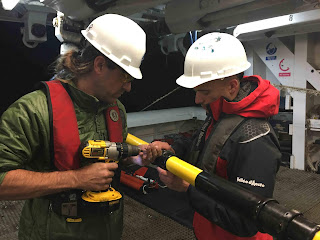 When streamer deployment begins, the crew attaches a tail buoy with a GPS to the end of the streamer, and then they start to let out the line. Deploying each 6 km long streamer takes about 4 hours and, during that time, our job was to assist in attaching birds, acoustics and weights in the correct placements.


We acted as an extra set of eyes to keep track of where we were on the streamer, and to make sure that no device or weight was missed. Weights are assigned to the streamer to ensure that it stays at the same depth in the ocean i.e., it is neutrally buoyant in seawater. We also double (and triple!) checked serial numbers of the birds and acoustics, making sure they matched the spreadsheet. 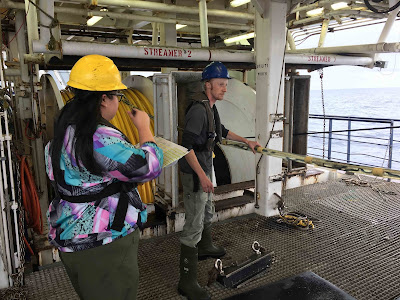 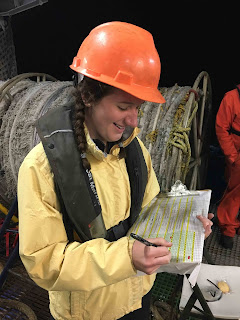 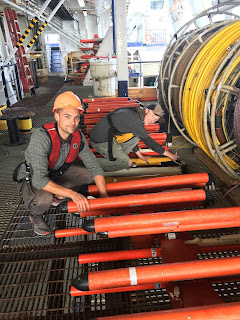 The birds look like two canisters about 1 m long with 8 inch “wings” coming off either side. The acoustics look very similar but without the wings. We attached each bird and acoustic to a battery, recorded the serial number of each, and then lined them up in the order in which they were to appear on the streamer. The birds help keep the streamer at a constant depth and oriented in the right direction.

After streamer deployment on the starboard side, the crew let out the paravane; a large black float with a metal panel below it, which is attached to the starboard streamer at an angle. This keeps the streamer parallel to the other streamers rather than migrating towards the path of the boat. The next streamer deployed was on the port side, and a paravane was attached to that streamer as well. Lastly, the inner two streamers were deployed.


There were other miscellaneous jobs that we could assist with during streamer deployment such as: changing lead in lines, marking every 5 m on the lead in with spray paint, or retrieving coffee, snacks, pens or tape for the hardworking crew. Overall, it was an exciting, hands-on start to our summer at sea!